Putting the world online one parcel at a time 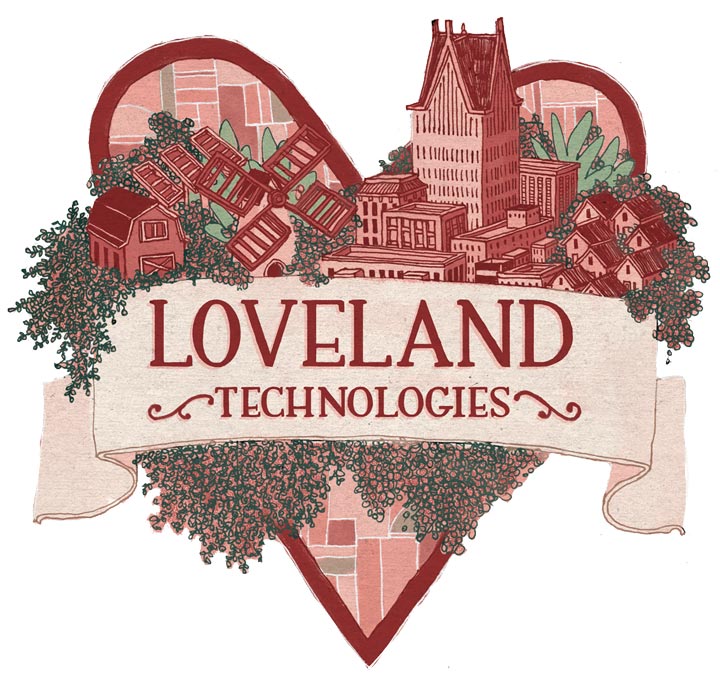 Loveland Technologies is based in Detroit, Michigan with teammates in the Bay Area, New York City, and Cleveland. We are dedicated to putting America online parcel by parcel, and work with governments, developers, neighborhood groups, and passionate individuals to gather and present property information in clear, actionable ways.

Loveland has continuously evolved since its founding in 2009. In 2019 Loveland merged its makeloveland.com and sitecontrol.us sites into landgrid.com: one simple site for property data, parcel maps, and field surveys.

We also encourage other mapmakers and app developers to license our nationwide parcel data to improve their own products and analyses. Our goal is to be the go-to resource for all things land parcel data.

In Detroit our community missions include arming people with information to battle a plague of tax foreclosures and running an ongoing survey of property conditions to help fight blight.

LOVELAND in the News

Landgrid GM Sahana Murthy was interviewed for GeoHipster by Mike Dolbow on topics ranging from our extensive coverage and complex cleaning and acquisition process to her vow to travel to every state in India.
February 24, 2020

TREC lays out roadmap to fight blight in Dallas

The plan was developed after an extensive data collection push that included documenting housing and demographic trends, public and private investment activity, and affordability.
January 29, 2020

The Michigan Health Endowment Fund awarded $500,000 to a major new health initiative at Wayne State University partnering with organizations including Loveland Technologies that has the potential to reshape how we think about health interventions in southeast Michigan.
December 02, 2019

Cleveland re-surveys east side neighborhoods to track change over time

There’s no question that over the last three years, the combination of the city of Cleveland and the Cuyahoga Land Bank working together, and independently, have removed a lot of the most-distressed structures,” said Frank Ford. “So there definitely has been this movement to remove this blight that is undermining the housing market. To me, that suggests the housing market is becoming a healthier housing market on the East Side of Cleveland, and that is going to lead to less abandonment.
March 31, 2019

"There has been a loss of trust for a long time," Paffendorf said. "There is not a consistent policy on why properties are foreclosed or not. ... I hope this is a gateway to a wider investigation that (the county isn't) following the law."
March 15, 2019

This week, we chat with Jerry Paffendorf, co-founder and CEO of Loveland Technologies, about how the company collects parcel data from all over the country, how parcels were measured historically, and how they can be used to create better transparency in cities.
February 21, 2019

The way our America is subdivided, owned, taxed, and used is of critical importance to the health and development of our communities, yet this underlying land grid has largely remained inaccessible. Enter landgrid.com. Loveland Technologies — a property mapping and data company headquartered in Detroit, Michigan — has spent years gathering and organizing a nationwide dataset of 140 million land parcel shapes and records that cover 95% of US residents. Now this information is available for public use alongside affordable tools to work with and add to it.
January 29, 2019

Jerry is an American mutt from the forested farmlands of New Jersey who's lived around the country in Portland, Houston, Los Angeles, New York, San Francisco, and Detroit, where he moved in 2009 and started building what's evolved into LOVELAND Technologies. Jerry dropped out of high school, got turned on by Ray Kurzweil's "The Age of Spiritual Machines" while in art school, and earned a Master of Science in Studies of the Future from the University of Houston-Clear Lake.

Working at the Acceleration Studies Foundation for two years, Jerry gained a deep view on how each generation of technology builds the next with increasing speed. Jerry gravitated towards the virtual worlds industry where he pioneered many projects and experiments within the Second Life user-created 3D world, and researched convergences between maps, virtual reality, and social networks.

Jerry earned a purple heart in Silicon Valley after co-founding a venture capital-funded company you've never heard of, an experience which made him even more passionate about putting the world online outside of what's currently trendy in the Bay Area.

Detroit has become an endless education and influence for thinking about how information systems can help improve the function of cities, the agency of residents, and the use of physical space. He likes reading books and watching documentaries about all kinds of things, road tripping, running around in circles, and growing LOVELAND into something more and more meaningful all the time.

Mary grew up in southeast Michigan, co-founded LOVELAND and has been running operations while wearing 1,000 hats since 2009. Her experience in library science and fine art are both vital to the functioning of this company, as its roots include balancing a mixture of unrestrained creativity while keeping many small things organized.

Mary is very active in her neighborhood as the President of the Detroit Dog park in Corktown, a member of the Corktown Business Association, and a board member of the Imagination Station of Roosevelt Park.

Larry began a life of programming and vector graphics as a wee lad, wielding a C compiler and AutoCAD before he was out of elementary school and building web pages as soon there was such a thing. He went on to study algorithms and computer science at the University of Chicago and enjoyed an internship at Argonne National Lab, prototyping visualizations for supercomputers and experimental projector tech.

After moving to San Francisco in 2005 he worked at a boutique geospatial & virtual reality studio, writing 3D rendering engines, spatial databases, and web and mobile apps and honing his skills with GIS tools. In 2008 he took a sabbatical to pursue a fascination with generative art & design, landing a number of gallery showings and performances in SF. This is when he met Jerry and started LOVELAND as a side project. Until going full-time with LOVELAND he engineered at a social networking company, absorbing the arcane lore of web scalability for millions of daily users. Since then, he's been building LOVELAND's web architecture and map interfaces including WDWOT, Site Control and Motor City Mapping.

Matt Hampel has worked with nonprofits, newspapers, universities, and other organizations to build tools for the public good. A native of Ann Arbor, he is now based in Brooklyn.

At Loveland, Matt helps build our web and mobile apps and works with our parcel team to improve our nationwide dataset. Before joining Loveland, Matt co-founded the startup LocalData, was a Code for America fellow in Detroit, and worked as a technology project manager at the University of Michigan.

Sahana is a product strategist, manager & marketer with extensive experience working with software companies & startups of all sizes across USA & India. She has worked in various industries & technologies ranging from SaaS/PaaS platforms to mobile apps to AI based products.

At Loveland, Sahana helps with company & growth strategy along with managing the team & daily operations. Based out of Saginaw, MI, Sahana is a mom who loves to cook, travel, read & binge watch!

Tiffany spent several years working in the non-profit world before joining the LOVELAND team. She strongly believes that knowledge is power and wants to connect people with data and tools that will help them make more informed decisions regarding property. She has a MSW in Community Development from Wayne State University and a BA in Anthropology & Psychology from the University of Michigan.

Matthew works to manage all parcel data gathering and updating here at Loveland, as well as handling the cartographic side of things. He firmly believes that a better understanding of land ownership, both within the US and abroad, can only come from open access to cadastral data. A Metro Detroit native currently based in Philadelphia, he has a MSc in Spatial Data Science and Visualisation from University College London, as well as a B.A in Geography and a B.S in Urban and Regional Planning from Michigan State University.

A long-time resident of Cleveland, Nick started working for Loveland mid-2017 with a background in data analysis and research forged in the crucible of the Levin College of Urban Affairs at Cleveland State University. He also spent time working in the fields of community organizing and housing, where he learned the value of property information as a tool in the effort to stabilize neighborhoods.

At Loveland, Nick is often out in the field working with organizations across the country, assisting with projects ranging from citywide surveys to data strategy and analysis. When in the office, he works with his colleagues to continuously improve the data offerings available on the site and make Loveland the premier tool for property data and analysis.

Blake Girardot is an open source software and open data enthusiast. In his previous work with Humanitarian OpenStreetMap Team he saw first hand how locally organized data collection enabled communities to understand and address local challenges. As a member of Loveland's Data Team, he brings that same passion for community empowerment to his work. He spends his free time outdoors with his wife and dog or at the local makerspace.

A Michigan transplant, Krista grew up in the Metro Detroit area. It was at the age of nineteen that she, with her partner and son in tow, traveled to Seattle to discover just how evolved our world is courtesy of technology. Krista's passion is rooted in supporting those whose voices aren't heard because an invite wasn't extended to join at the table. Krista is enthusiastic about LOVELAND Technologies efforts to gather and present information about property in clear and actionable ways because transparency, and breaking down the divides, is at the forefront of the work that Krista has established with her small business, Detroit Parent Collective. In Krista's leisure time (what's that?!) she enjoys traveling with her family, working out, gardening, engaging in her community and advocating for equity.

Born in an Ohio kill shelter, Pasta has come a long way. He has a strong background in agility, obedience, and sharing your lunch with you. Pasta believes that the creation of a national parcel layer will contribute to conservationist efforts and lead to more places for him to play and explore.

Loveland employs a team of dedicated parcel prospectors who work to find and organize data around the country. They are working for you deep in the country's parcel mines, but don't worry, they wear the proper equipment to avoid parcel lung.

Loveland works with an amazing team of advisors and alumni who have contributed to our work over the years who continue to work on projects with us. From programmers to government to policy professionals to community activists, you could say there is a Wu-Tang element to our team, and indeed some have.